Neither One Nor the Other / Ni l'un, ni l'autre… is an immersive environment excited by presence. Initially developed at the 2018 Déranger creative lab—a National Film Board of Canada French Program initiative for Inuit, Métis and First Nations artists—Jessie Ray Short and Dominic Lafontaine’s symmetrical installation is comprised of two old Sony handy cams, two projectors, and a large, suspended sheet of a reflective polyester film called Mylar. The handy cams are set up to film the mylar continuously; these recordings are projected in real-time directly back onto the mirror-like surface that is being filmed. This creates a chaotic, illuminated feedback loop that is reflected dramatically out onto the walls of the otherwise darkened space. Mylar is so thin that it, and so the reflections it generates, tremble with the smallest atmospheric vibrations. Those might be caused by bodies in motion, laughter, or the periodic low sonic rumbling of the installation’s sound component—an augmented field recording of nearby ocean waves. The reflected patterning brightens, dims, and morphs in reaction to these disruptions while the colours of its web-like configurations shift inexplicably over time between royal blue, violet, champagne gold, pale aqua… There is an organic quality to the effect. It is similar to how light looks when bounced off of the water. One viewer described experiencing the piece as corporeal as if he were observing the energy of the body. There is some kinship with performance art in the unpredictable, unrepeatable quality of the reflections. This further supports the biological effect that connects the piece obliquely, somewhat strangely, to the living. 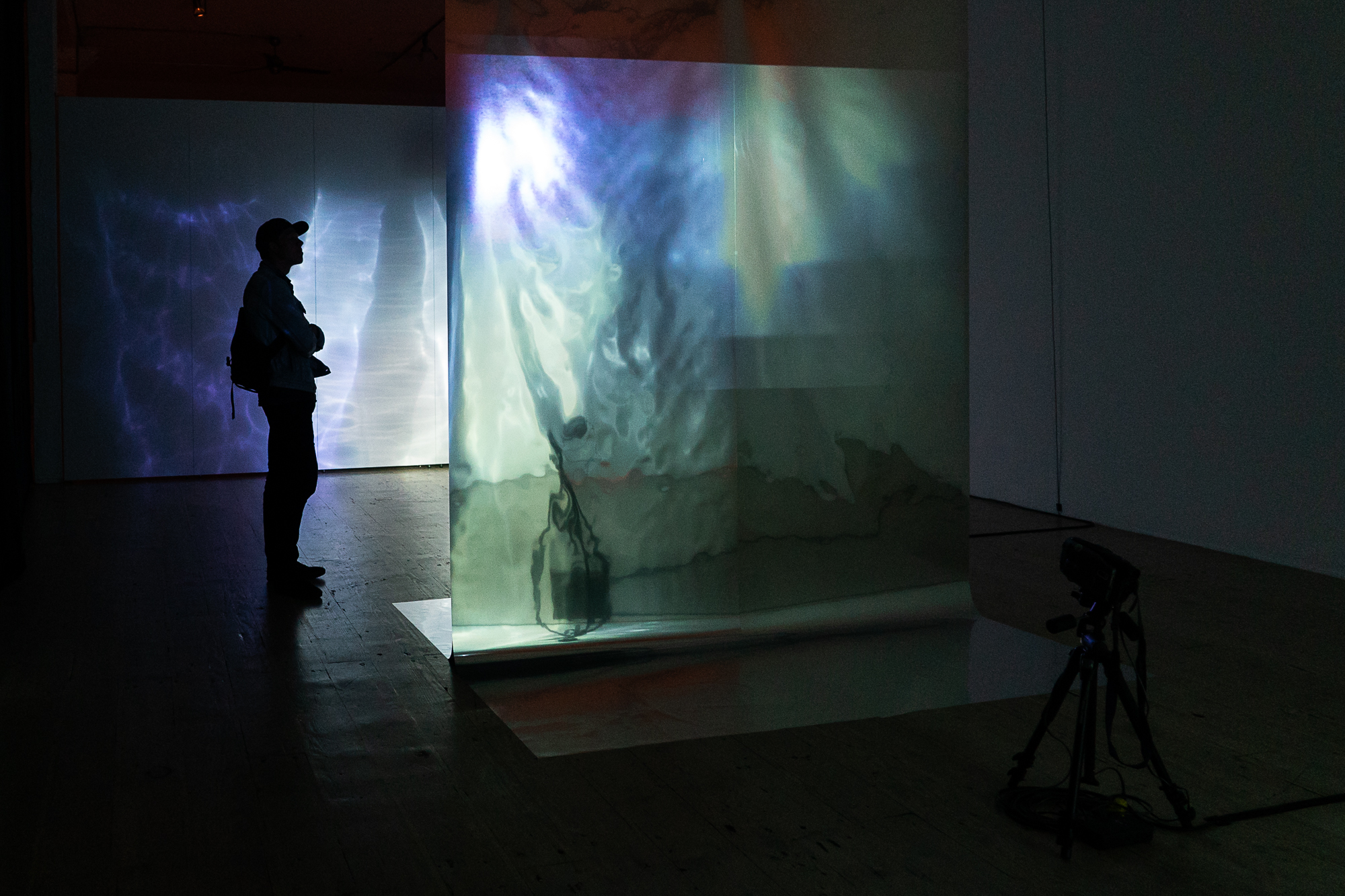 The artists have a stated interest in the paranormal regarding this project; they want “to make the invisible visible”. They could be said to have achieved that simply in how the reflections register subtle and generally imperceptible disturbances of air. The responsive shimmering is a reminder, for example, that the audible is physical and that we are all constantly immersed in a tangible medium. Incorporating field recordings of the local sea sets the piece into a kind of energetic dialog with the immediate natural environment, giving the work a degree of site-specificity that could offer a ‘reading of place’ via the visual patterns that are generated albeit an abstract one. But there is also the chaotic state of the feedback loop to consider, the specificities of the cameras, the way they translate light into data, and how data is being iteratively reinterpreted. The power levels, settings, and particular qualities of the projectors have an impact too. Mechanics, information, electricity are all at play here, and the structure created allows us to observe something of the idiosyncrasies of these interactions. The artists had, in fact, tried implementing their set-up with newer video cameras but found these were too good at processing ‘clean’ images, too adept at removing inconsistencies. The reliance on older tech to create this piece ties it to a zeitgeist moment in which Netflix's retro-paranormal series Strangers Things and its German counterpart Dark are hugely popular. It revisits a period in which the heft of bulky objects infused with energy more aggressively disrupted the speed and purity of digital information, seeming to allow unfathomable elements to seep in (or out). 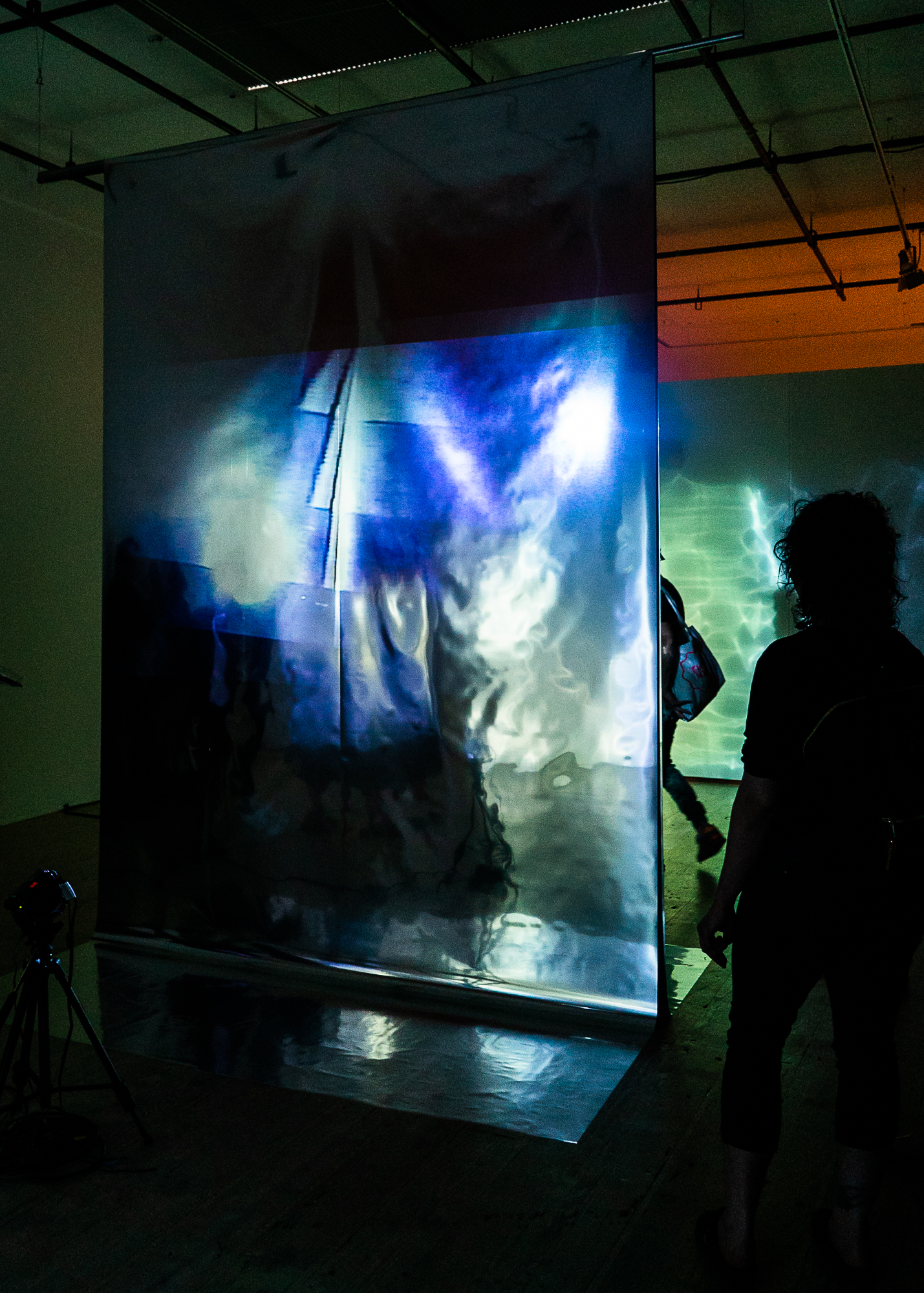 The ambiguous reactivity of this installation also vibrantly Illustrates slippage that occurs between calculated cause and effect. The idea that cause and effect constitute a simple, predictable equation that can ultimately be mastered underpins many of the broader values related to Western empiricism; but despite (or because of) all the experiments, deductions, and algorithms, our biosphere, and sociopolitical landscapes are, without hyperbole, currently on the verge of collapsing around us. As is evoked in the Yiddish proverb, ‘Man plans, and God laughs.” The effect of any given cause may easily elide the intention of the actor/action. So it is with this installation: You can speak near it, walk through it, stand purposefully in front of a camera to temporarily disrupt the looping light, and any of those actions will change the patterns reflected on the wall in a visually fascinating but not entirely comprehensible nor predictable way. In contrast to the rationalist bid for full comprehension and control writ large, Ni l’une, ni l’autre emphasizes how much ungovernable complexity saturates our interactions, how factors and energies we aren’t aware of are constantly interceding into our environments. It ‘makes the invisible visible’ while respecting the mysterious and acknowledging the unknown. It is an ode to ghost butterflies flapping imperceptibly in our machines.