Among the rarefied realms outside the mainstreams of music, vocalist Charmaine Lee has a remarkable way of fitting in. A graduate of the Jazz Studies master’s program at the New England Conservatory of Music — not the most conservative of schools, to be sure, but a conservatory nevertheless — Lee made her first small waves in the noise and improv scenes. More recently, she’s been working and performing in contemporary composition circles, being commissioned by the likes of New York’s Wet Ink Ensemble and Chicago’s Spektral Quartet. The key to moving between sweaty basements and concert halls, it seems, is staying true to herself.

“The communities I interact with are all quite different,” Lee says. “I feel a deep purpose in finding connections with groups of people from seemingly disparate backgrounds. I try to see beyond perceived boundaries. It helps me understand the world beyond my biases. I’m very committed to that mindset.

“I think a big part of how I was able to move fluidly was due to my focus on improvisation and my commitment to saying ‘yes’ to pretty much every opportunity that came my way,” she adds, “whether it be at a friend’s auntie’s cousin’s Christmas party, someone’s bedroom concert, or anything that seemed outside my comfort zone at the time. I try not to limit my performances to some idealized space, but rather fill out whatever context I find myself in.” 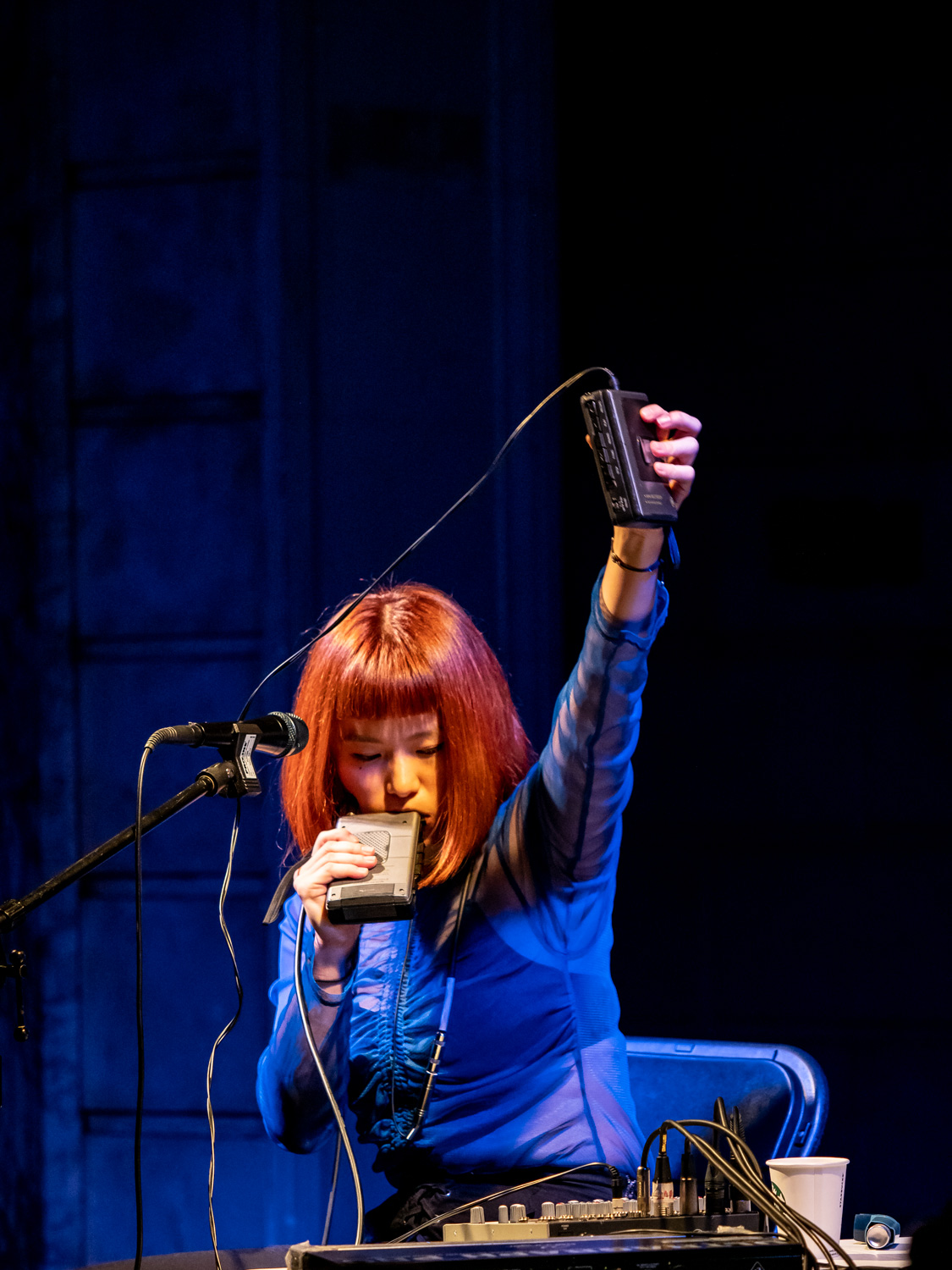 What makes Lee’s morphing profile all the more surprising is just how difficult her work can be. While she consistently focuses on the voice as an instrument, she has turned more and more toward the guttural, the sounds buried in the larynx and lungs, nonmusical noises that emerge from deep within. Her performances can be impolite, unnerving, even ugly. They can also be refreshing and, at times, enormously appealing. In an essay for Wet Ink Ensemble’s online archive published in May (“Reflections on Building a Personal Language”), she outlines the development of what she calls a “language built on the traditions of noise, ASMR [autonomous sensory meridian response], drone, ambient, experimental electronic, and free and new music”. That’s a lot to take in, but she manages to combine the elements into singular if abstract, statements. And while the settings may differ, the approach and intent remain largely the same: creation in the moment and sound as expression, whether or not it’s purely musical.

Employing as many as four microphones at a time and taking advantage of the natural distortion and feedback occurring within and between them, Lee creates an accumulation of sounds that can be surprising, to say the least — inhuman, in some sense, even if her voice is always present somewhere in the mix. Added to that is the visual disturbance of the bandage wrapped around her throat, securing one of the microphones flat against the skin of her neck, and the scene becomes one of trauma that can’t be identified.

The trauma, of course, is just a projection. It might better be described as a scene of unparalleled innovation. Her friend and occasional collaborator Conrad Tao, a gifted classical pianist and interpreter of contemporary and canonical works, describes her process in BOMB Magazine as “fucking badass”, elaborating that “you’re doing everything inside your throat, and the result is so multidimensional. An entire world of these concentrated bursts of sound, but your mouth is closed. Kind of like a sonic dramatization of an interior dialogue”.

Those “concentrated bursts” made Lee a natural in the world of noise improvisation, where the unusual is often valued more highly than the appealing.

“That was where my origin story started,” she says. “I feel very connected to the environment of a show where there’s maybe ten people and a line of old dudes in the back who are rocking back and forth, even though there’s no explicit beat. We all share a collective experience of being there for largely no other reason than the music.”

That might be where she sees her origin story beginning, but her actual story goes back a bit further. Lee was raised in a musical family in Sydney, Australia, by parents who had emigrated from Hong Kong: her father, a jazz guitarist, and her mother, a classical pianist, and percussionist. While she studied classical guitar, Lee was always drawn to singing and developed an awareness of different approaches to the voice while in high school. Powerful performers from the height of popular music — Anita Baker, Gloria Estefan, Mariah Carey, Whitney Houston, Patti LaBelle — provided early vocal influences, as did Joni Mitchell. Lee’s rendition of Mitchell’s “A Case of You” can still be found at the bottom of her Soundcloud page.

“My grandma insists I keep it up there,” she says with a laugh. “She listens to it frequently.

“It’s a good reminder of the mindset I was in for more than half my life,” she adds. “There was a future path I had in my head down that road, which is far from what actually happened. I think there’s joy and beauty in all these different ways of music-making, and they all inform me.” 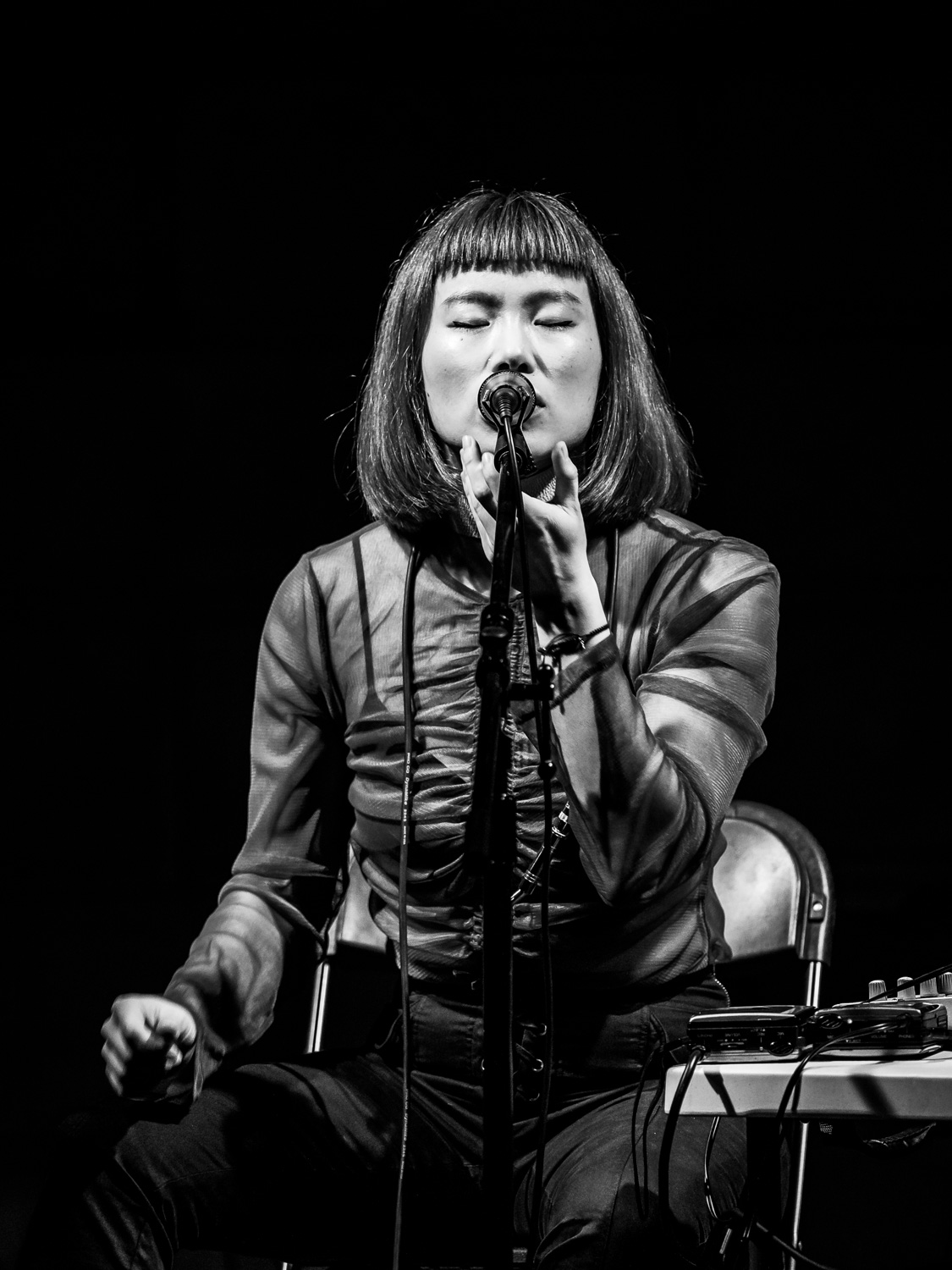 Lee recorded the Mitchell song in the senior year of her undergrad at Princeton University, where she studied Sociology. A few months later, she enrolled at the New England Conservatory, where she studied with singer Dominique Eade. Lee also signed up for guitarist Joe Morris’s Free Music Ensemble class, one of the few vocalists to join in the 20 years he’d been leading the course. In Morris’s class, she began listening to and having to deal with the more exploratory music of such luminary figures as Anthony Braxton and Steve Lacy.

“My entire way of listening changed,” Lee says. “I guess I consider myself a late bloomer in that way. I had spent many years outside and away from music, living broadly and coming to understand who I was as a person. I was ready to begin processing those experiences into sound. There was a lot of room that Joe made for me through his methodology and learning the music of people like Cecil Taylor and Ornette Coleman. Joe was very curious about how a vocalist was going to work within this sphere. He and the members of the ensemble gave me space and encouraged me.”

At Morris’s suggestion, Lee started bringing a volume of 20th-century poetry to class to provide jumping-off points for improvisation. As she developed confidence, she used the book less and less. Prepared texts rarely appear in her work today, although she incorporates a verse from an Australian poet, Dorothy Porter, in her new record.

“It’s not entirely perceptible, but I know it’s there,” she says.

The new record, KNVF (out on the French label Erratum Musical), contains a cross-section of techniques, single and multi-tracked, in eleven short tracks, the longest being just over five minutes. The shorter pieces offer an opportunity for a different focus than in her performances, which themselves aren’t often longer than 20 or 30 minutes. But in easily digestible chunks, one can hear the personality, the structure, and, maybe most importantly, the music in Lee’s work.

“There’s a lot I’ve learned from this record about sound and the process of recording,” she says. “I recorded everything in my bedroom. Some of the tracks are very clean, with a single-minded focus, and other pieces are more like little windows into these worlds that I play inside.”

Photograph courtesy of the artist.

The move from noise to new music might have been a bigger leap than from jazz to noise. While such divisions are at least somewhat arbitrary, it did require a shift from improvisation to putting her ideas on paper for others to interpret. For Spektral Quartet, she struck a balance. While she finds the concept of musical notation “interesting”, she says, “to try to replicate a live performance into notation just didn’t work for me”.

She solved the problem by making it into a process, “translating my personal approach to improvisation”, she says, for the quartet. “Instead of a score, why don’t I leave them with a performance practice?” A recording was made after two rehearsals which she edited into the final piece, but, she stresses, “any live manifestations of that piece will strive to be different each time”.

What the quartet ended up with is essentially a map for improvising in Lee’s language. The notes might not be fixed, but the process isn’t altogether different from learning and interpreting a Brahms score. The piece Lee constructed for the quartet, “Spinals”, is on their album Experiments in Living (released by New Focus Recordings in August), alongside Brahms’s “String Quartet in C minor”, in fact, as well as works by Arnold Schoenberg and Ruth Crawford Seeger, and contemporary compositions by George Lewis and Wet Ink’s Sam Pluta. Lee appears alongside the string quartet in “Spinals”, spiraling around them, emulating the noise of bows scraped on strings, singing above them or subsuming below. It’s a dizzying and thrilling six minutes enhanced by real-time decision-making.

“I have found that the practice of improvisation opens many possibilities for context, collaboration, and social, creative connection,” Lee says. “It is driven by a dialectical process and compels you to recognize the autonomy of others. I feel it has the greatest potential for engaging with a wide variety of groups and spaces.”

The Wet Ink commission called on her to translate her personal language for a bigger group, specifically the members of the composer-performer collective’s Large Ensemble. She divided the ensemble into smaller subgroups and provided each with a graphic score — something closer to illustration than traditional notation — and worked with them to provide an “oral transmission of feel and sound”. “Smoke, Airs” is included on Wet Ink’s new record (released in September on Huddersfield Contemporary Records), and gave the album its title.

As with “Spinals”, the process of learning and performing “Smoke, Airs” may not have been as different to working with other scores as the end result might suggest — at least scores by composers in the still uncharted waters of 21st-century concert music, where notation can mean many things other than dots and lines.

“I think the piece is an orchestration of some aspects of the sound-world and language Charmaine has developed in her solo improvisational practice,” says Wet Ink pianist Eric Wubbels, who was also called upon to vocalize in the piece for the performance at Huddersfield Contemporary Music Festival. “That said, this is a piece that she's conceived, constructed, and notated in a very different way than she would a solo performance, so I think it’s most accurate to focus on the fact that this is her composition, and while we as the ensemble have freedom and agency with some of the details, the form, material, and orchestration are all laid out for us.” 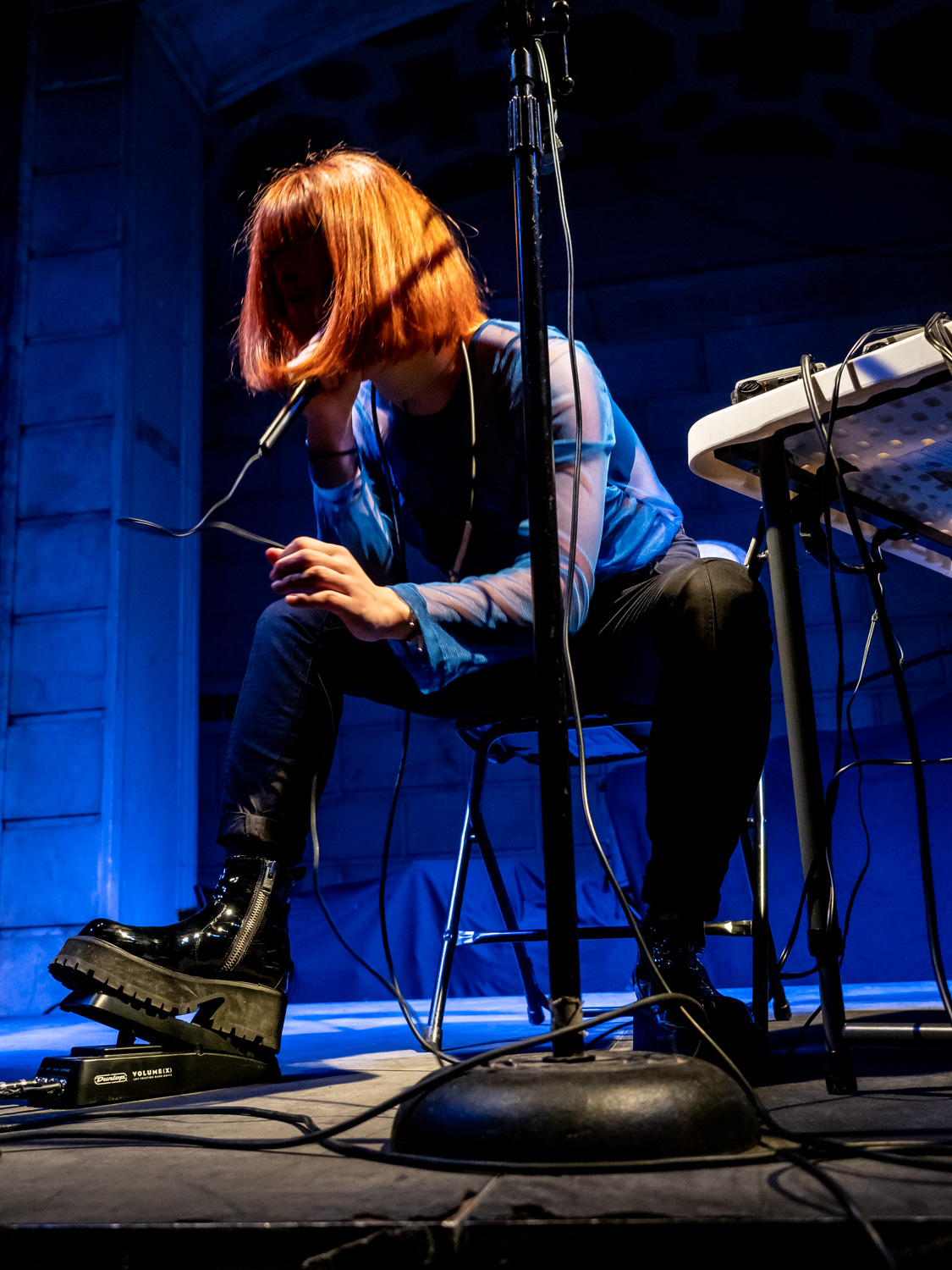 While Lee has moved in a few short years from house concerts to concert halls, it would be a mistake to see it as advancement or her as a careerist. Just as a melodic refrain might still find its way into her outré experiments, the noise and improv scenes, she says, will always be a part of her work.

“I try to strike a balance,” Lee says. “I hope to always be active at the underground local level because that is often where I learn the most and see performances that take the most risks. I’m most inspired by my friends and peers.”

“I didn’t predict nor really aspire to it,” she says of her emergence in the new music world. “As it happened, I felt increasingly committed to being a part of a larger movement that offers another way of listening and a different set of values. I’m excited by the fact that I’m able to operate in these spaces and still feel very much like myself.”