In September 2017, Cheng Yi-Ping, aka Betty Apple, embarked on three-week-long field research and art residency program in Mexico City. Vernacular Institute hosted the art residency program. Founded in 2014, Vernacular Institute is an art project focusing on art publishing and independent art book fairs that was initially based in Taipei but relocated to Mexico in 2017. It currently runs a bookshop, various curatorial and publishing projects, and an international residency program in Mexico City.

The plan was to deliver two performances: one being her most well-known "Vibrator Love of Sound" piece, which uses pink powered bullet vibrators to sonically explore the material environment, and the other being "The Ying Ecstasy" sound project, a piece which developed out of her "The Ecstasy of National Anthem" sound project that was submitted for her MFA degree in New Media Art from the Taipei National University of the Arts back in 2014. This project involved taking audiences on a cruise in a cab with politically charged sound art blasting from the car speakers while car windows are opened and closed to create a live mix of internal and external soundscapes. 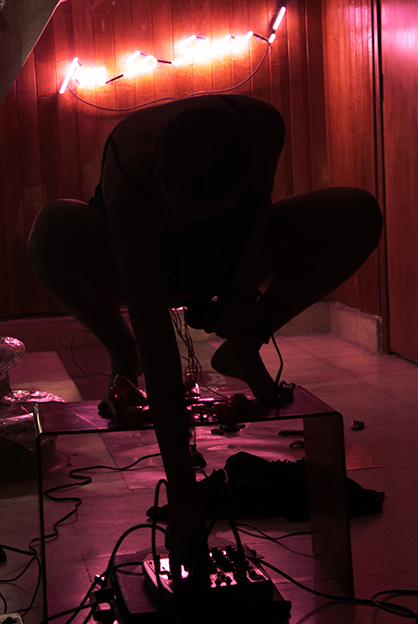 Before her two-week residency at Vernacular Institute, Apple embarked upon a one-week field research trip to Oaxaca City, known for its well-preserved indigenous cultures. She recorded the voice of one of the indigenous merchants, explaining in their native tongue how they value their handicraft not merely for its use-value, but view it as an interface between the land and the people in which their knowledge of nature is weaved into the work. She believes the merchant's interpretation of the artisan's relationship with handicraft has a strong ritualistic aspect that is entirely different from man's relationship with mass-produced products today. Such an interpretation charges the production process with meaning, something that is impossible for the industrialized world.

This time, her theme was time: "I try to articulate a connection by rattling the vibrators against objects of my choice," she explained. "Oaxaca has always been proud of their handicraft. The quintessence of handicraft is the downplaying of the need for speed in production. When you weave or make pottery, you also have to learn how to extract clay; how to process the silk cocoons and dye – the point is not simply to make a lot of beautiful clothes in the fastest way possible. I contrasted this notion with the vibrator, which is a product of speed, a product of sex, and it's not even something that necessarily provides you with great sex."

Instead, she decided to record a live jam with Guatemalan cellist Mabe Fratti, whom she befriended during her residency in Mexico, to mourn the tragic event. The result was "Future People's Message in an Earthquake," an hour-long recording that begins with a duet between Apple's bright chiming synths and Fratti's deep musing cello, padded with rumbling taiko drums. Looped vocal samples of a Mexican woman imploring the sound technician to lower the volume temporarily stalls the piece to a halt, only to be relaunched in full force with jarring Wagnerian overtones. In the middle of the composition, the voice of sound artist Kyle Kaplan appears, giving breathing instructions. This was a recording made by Apple during a yoga and meditation session Kaplan led at the United Yoga Studio in Taipei. The highlight of the latter half of the session is Fratti's singing, which is sampled and looped by Apple, and later pitched and warped, gradually forming an eery siren choir that seems to be singing from the bottom of a well.

This came during an attempt to console Fratti when she expressed distress over her inability to offer much help during the crisis: "I said to her, you don't have to be sad. Everyone has their own role in society. We artists are not engineers, so we cannot do what engineers do, but you can record everything, though not in the same fashion as journalists; artists should be more detached and record the side of reality that is more spiritual and less addicted to the event that is happening right now."

She added how the visual artist Eduardo Makoszay was also recording the event in his own way with his solar-powered camera, gathering images and sounds from the stricken areas, concluding that "in situations like these, I think the goal of an artist should be different from everyone else. The thing that the artist creates should be able to last, and the intensity of such a creation should be able to increase with time".