“[A]ny organized repetition of events, once announced in advance, becomes a program, a descriptive notice of a formal series of proceedings.” [1]

The above quote, addressing the relationship between buildings and bodies, is taken from Deconstructivist architect Bernard Tschumi’s 1981 essay “Violence of Architecture”. By violence, he states, “I do not mean the brutality that destroys physical or emotional integrity but a metaphor for the intensity of a relationship between individuals and their surrounding spaces.” [2]

Tschumi sees this violence as a generally symmetrical relationship of mutual “transgressions”, in which buildings impose parameters on the movements of bodies, which, in turn, interrupt the purity of architectural space. But despite the diffusion of agency that occurs in these would-be totalitarian structures, the imbalance of power is nevertheless ensured through the administration and policing of wandering subjectivities.

Sound is one of the most primary and omnipresent forms of social space. In describing concert arenas, Tschumi asserts that “Places aimed at the cult of excessive sound only suggest places aimed at the cult of excessive space.” [3] Taiwanese sound and performance artist Cheng Yi-Ping  (鄭宜蘋), better known as Betty Apple, offers her own perspective: “Both techno and noise relate to space… Techno is like architecture; it’s a fictional, external space — whereas noise is a personal, spiritual space.”

And so a national anthem might, in fact, be a manifestation of the kind of repetitive, premeditated spatial program that Tschumi describes. We could consider the violent parallels between the effects on individuals of a physical building, constructed according to precise architectural specifications, and the effects on individuals of an infinitely repeated anthem designed according to precise values and emotions in order to generate a psychosocial nation-state.

Taiwan’s national anthem, which is, in fact, the National Anthem of the Republic of China (ROC/中華民國), has been integral to the development of Apple’s sound philosophy and work. In her deconstruction of this programmatic nation-building fiction, she eschews its aspiring vanguard nationalism to advance concepts of the feminine — engaging in chaos rather than obsessively exerting control.

The history of Taiwan’s state apparatus is marked by the excesses of its mechanisms of control, most notably in the martial law period (1949–1987) and during the wholesale repression of political dissidents known as the “White Terror” (白色恐怖). Apple explains, “There is still a law on the books in Taiwan that forbids making fun of the National Anthem. Today, we can clearly see this kind of government control over people in China, but, interestingly enough, in Taiwan, the control has been internalized and transformed. 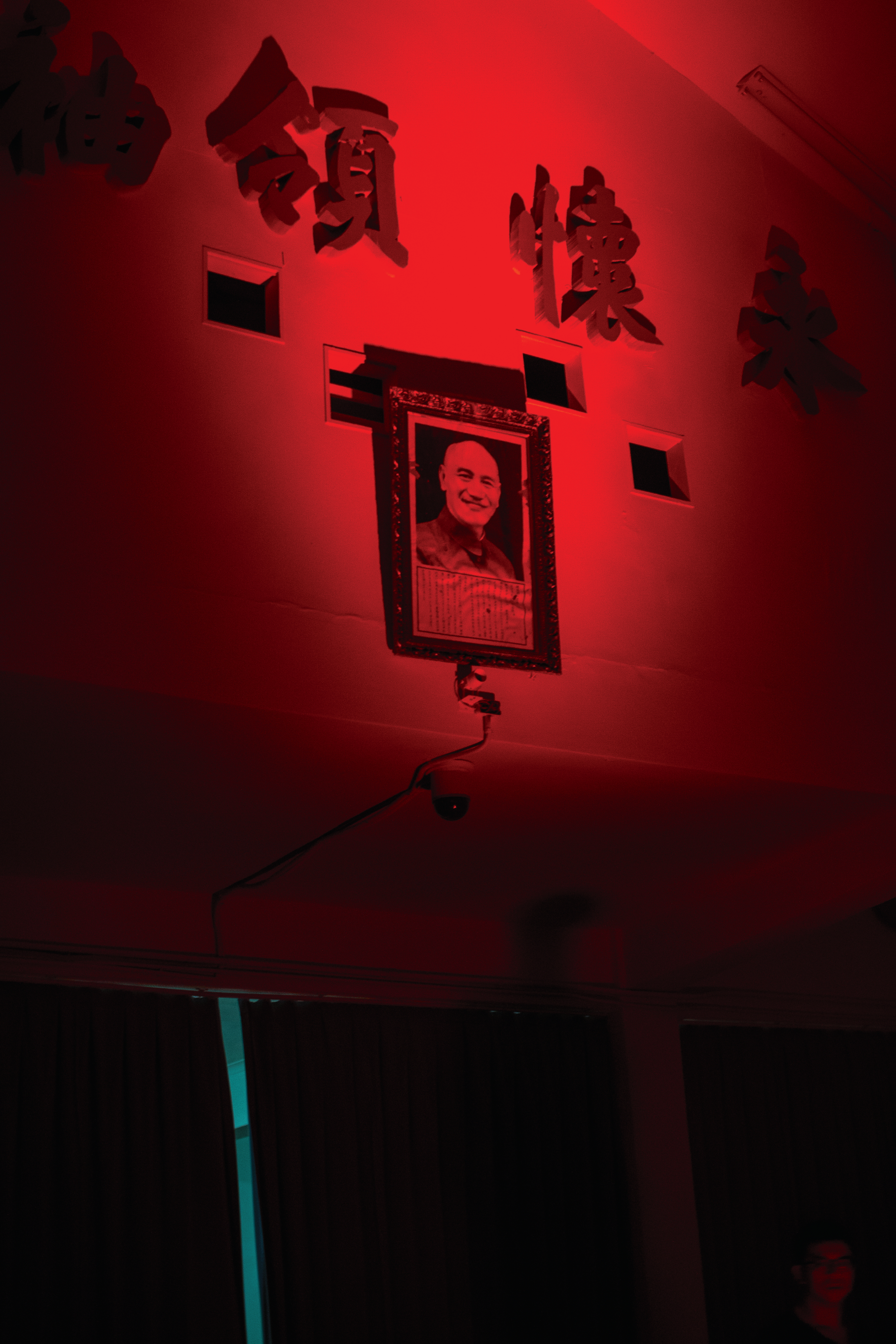 “The problem for our generation has already gone beyond discussions of country, however, as the preoccupation with nationhood has resulted in too many historical scars. Nationalism in Taiwan is like a plate of inauthentic Italian food, but we are an island of people who are fond of dwelling on historical ideology.”

Large Quote
“Sing together! Or I will put you in jail... Join the rhythm of our world!”

Apple disassembles the Anthem throughout her work, remixing it in live performances and transliterating its Mandarin lyrics according to their phonetic similarity to various English slang. In her performance work “The Ecstasy of Anthems: Cha Twat Gringo” (超脫國歌, 2014), she draws on her theatre background to play the role of a cop-cum–tour guide, dressed in a loosely buttoned uniform and big shades, shepherding groups through Taipei in a taxi while loudly playing her remixes of the National Anthem.

As they cruise through the city, the sounds of the streets flow through open windows, allowing a messy, unpredictable temporality to dilute the transcendent program of the anthem. Maintaining a tension between the chaotic environmental elements and her references to authority, she commands a recalcitrant group: “Sing together! Or I will put you in jail... Join the rhythm of our world!” The work critiques the long-term effects of colonial endeavours and the role of aurality within these processes.

Theorist Nina Sun Eidsheim has proposed a “vibrational theory of music” which explores the idea of sound as a lived, multisensory experience. In her book Sensing Sound, she points out that, “Historically, Western music studies have favoured the idealized and abstract at the expense of the sensible, unrepeatable experience.” [5]

While no two listening or performing experiences can be identical, by explicitly injecting a live, unpredictable environmental soundscape into the essentialist melody and values of the anthem, Apple creates a contrast that affirms the sensible, unrepeatable quality of sound that Eidsheim describes. This awareness, in turn, facilitates the creation of spiritual spaces that might escape nationalist programs.

There is certainly a degree of inherent eroticism, insofar as these are sex toys, but it isn’t overwrought. Apple describes the vibrators as a “metaphor for the spiritual status quo of post-industrial society — people demanding one-time use, disposable, rapid and frequent individual climax”. There seems to be a strong affiliation between these plastic novelties and the national anthem as it figures in her work. Both offer superficial arousal, achieved by the programmed vibration of our membranes: a kind of arousal that might too easily replace more intimate social connections. “Capitalism is a romantic liar.” [6]

The vibrators agitate the drum, activating what Apple calls “weak signals of the sound of history”. Amidst the wash of digitally processed noise, she tends to the clutch of vibrators like they’re her brood, checking them one at a time. Eventually, she climbs on top of the barrel and gathers up the whole cluster under her skirt as if she were a kind of verdant mother ghost plant, bursting with trembling, potentially toxic seedpods.

The Mermaid is a culmination of past energy, an exotic mythological creature that has been captured. She inhabits multiple worlds, both familiar and tragically alien to her. Wearing a skin-tight, featureless, shiny black mermaid suit that covers her face, the artist looks as if she has been dipped in crude oil. She can only hop or wriggle to move around the performance space. She communicates or emotes, with howls and shrieks which sound alternately whale-like, seal-like and desperately human.

Large Quote
“So we were all mermaids, and the first Rubber Mermaid’s home was Taipei.”

The first Rubber Mermaid performance, at 435 Art Zone, in New Taipei City, begins with an overt reference to consumerism, as we encounter the Mermaid crammed into a shopping cart along with several long, thin, black balloons. Wailing, she frees herself from the cart and begins attacking it. Her amplified blows to the metal frame cause the bundle of vibrators attached to it to rattle deliriously, enveloping the audience in a sonic environment of hysterical noise.

She tears apart some of the balloons, letting them sputter off into non-existence. Then she aggressively shout-sings through a megaphone the simple melody of a commonplace children’s song in Mandarin, “My Home” (我的家) recounting a bucolic riverside environment. Finally, in a physically intensive feat, she flops her way out of the performance space and, in front of the building, plunges into an ornate public fountain, fulfilling her desire, as she describes it, “to return to the water in the dark”.

In “The Rubber Mermaid 02” (2015), at The Red Rattler, in Sydney, Apple performed in front of a CGI world, projected onto a hanging sheet, from which the Mermaid is suddenly ejected. Though she can see the world, she can only clutch at the sheet and can’t re-enter it. Eventually, she tears it down. The angst she expresses is underscored by the fact that the industrial barrel she beats on bears the brand name “Novacyl” — the world-leading producer of the ubiquitous, mildly numbing painkillers aspirin and paracetamol.

One of her most elaborate Rubber Mermaid forays was “Action Vacation” (海灘上種花月良宵, 2015), a collaboration with Japanese artist Kaya Hanasaki (花崎草). The performance took place in a nearly-but-not-quite drained pool, designed by the artist Luo Jr-Shin (羅智信) at Taipei’s Treasure Hill Artist Village (once a squatters settlement of military veterans). [7] Apple explains, “We used the ancient mermaid and the modern tiki-bar style as the basis for our critique of the idealized image of an island in the Western sense.”

The artists’ parody of this island paradise sees floating, sculpted styrofoam forms festooned with palm leaves and plastic floral leis, inhabited not only by the Rubber Mermaid but also hot girls wearing bikinis and shiny fake-grass skirts, brandishing oversized cocktail glasses. This microcosm is consumed by bubbles, shot from flashing bubble guns, and a waterfall of gold glitter poured from a glowing plastic orb. As the party continues, though, the styrofoam architecture breaks up and drifts, and everything gradually devolves from ecstatic revelry into a dejected, convoluted soup of various theatrical props.

In something of a contemplative counterpoint to the anxious dislocation and frenzied party-island stereotype explored in the Rubber Mermaid performances, Apple’s event “Mirage City Under the Lake” (迷幻水鄉, 2017) entices audiences to submerge into the ancient dark water of the Taipei Basin, the water to which the Mermaid wishes to return.[8] At a series of private locations, participants are invited to soak, ideally naked, in the baths while they both listen to and feel the recorded soundtracks.

The event invitation outlines, “When you step into the water, the sound fiction is already playing. It tickles your skin like millions of micro-vibrations from floating speakers; your pores, with your breath, birth your third eye.” It is a visceral reminder that, as Eidsheim states, “[T]he listening body... must be immersed in the material through which the sound flows.”[9]

Apple’s work resonates strongly with a poem by the Samoan poet Terisa Siagatonu. Samoa, like Taiwan, is an island nation; its coastal communities are threatened by rising sea levels. In “Atlas”, Siagatonu addresses the difficulty of trying to communicate how the ocean is not only her home and point of origin but a threat to her home’s very existence. She asks:

To return once more to Eidsheim’s vibrational theory of music:

“[W]e come to understand that when we make and otherwise participate in music, we do not do so at arm’s length. When we make music, we have a material impact on the world. Our musical actions have material consequences… [T]o quote Benjamin Piekut’s succinct formulation, ‘every musical performance is the performance of a relationship.’”[10]

Apple’s work allows us the chance to feel our way through these socio-spatial relationships, be they national, architectural or sonic. Her work provides us with the opportunity to consider whether the inherent violence of these relationships produces a healthy intensity or simply a destructive brutality. It demonstrates the potential of rupture, even within tightly controlled environments, activating new fictional and spiritual spaces through the regenerative power of constructive chaos.

[4] “The White Terror” (白色恐怖) refers to the suppression, incarceration and assassination of political dissidents by the Republic of China (ROC/中華民國) government that began in 1947 with the “228 Incident” (二二八事件). On February 27, 1947, a woman cigarette vendor was beaten by agents of the Tobacco Monopoly Bureau. The event sparked a mass uprising the following day against the military government, resulting in a violent crackdown
and the killing of tens of thousands of people. In 1949, the ruling KMT (“Chinese Nationalist Party”/國民黨) imposed martial law on all of Taiwan.

[8] “Mirage City Under the Lake” (迷幻水鄉) was directed
by Betty Apple and held at private locations in Taipei and Tainan, in November 2017, as part of Liquid Architecture’s Entering Tone tour.